“In anticipation of the release of the AMD X570 chipset and 3rd Gen AMD Ryzen™ desktop processors, GIGABYTE is ready to launch a product series that sets the standard for compatibility and product quality from an AMD platform based motherboard while checking all the boxes for a gaming motherboard,” said Jackson Hsu, Director of the GIGABYTE Channel Solutions Product Development Division. “Gamers and performance focused users will be impressed with the features that GIGABYTE has implemented on the X570 AORUS motherboards. Some of these highlight features include a 16-phase digital power design, PCIe 4.0, high-speed network connectivity, RGB Fusion lighting, and a new BIOS UI. Through our professional research and development, we have engineered a product that offers both the performance and stability gamers are looking for when building an AMD platform desktop.” 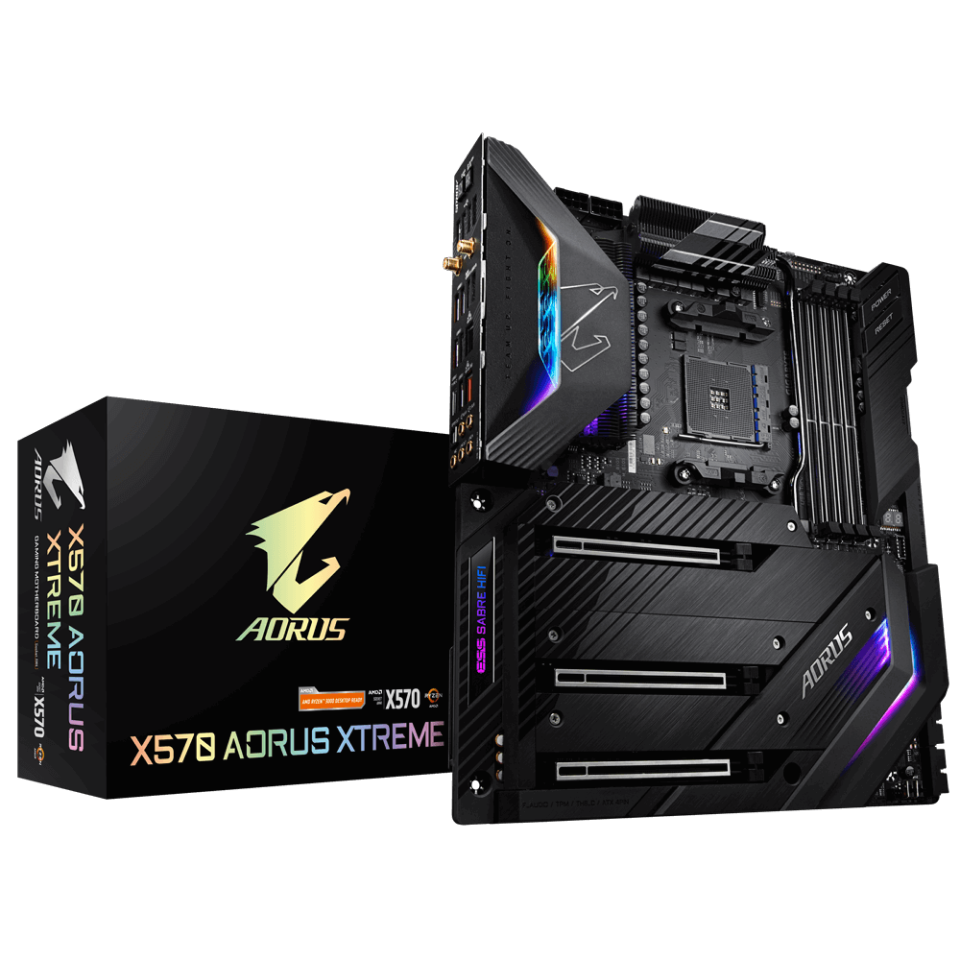 The highly anticipated 3rd Gen AMD Ryzen™ desktop processors deliver on the hype, outclassing previous generation processors with impressive performance jumps that users covet when they upgrade from one generation of processors to the next. Capitalizing on this performance potential, GIGABYTE packs at least 14-power phases in the digital power designs of each ATX board in the X570 AORUS Series. Different tasks require different levels of power consumption so to account for this varying power consumption, GIGABYTE uses a PowIRstage or DrMOS and different MOSFETs to ensure a more stable current flow and better power and thermal management while the CPU is running at its full potential. The flagship X570 AORUS XTREME motherboard boasts a 16-phase, all Infineon digital power design with each phase capable of managing up to 70A for lower impedance and improved balance. With 16-phases to work with, the motherboard reduces the loading per phase so that less heat is generated, improving the overall power efficiency, durability and service life of the motherboard. This allows for better performance and better overclocking and enables users to maximize the overclocking potential on the new 3rd Gen AMD Ryzen desktop processors without the concerns of an unstable power supply or high temperatures causing overclocking failures or diminished performance. The Fins-Array Stacked Fin Heatsink, Direct Touch Heatpipes, and the Nanocarbon Baseplate provide an incredible amount of cooling to the VRM and chipset making this the most comprehensive cooling solution for the 3rd Gen AMD Ryzen™ desktop processors, perfect for an AMD platform build.

PCIe 4.0 is here and with it comes higher bandwidth. With 32GB/s bandwidth and increased bandwidth for graphics cards, PCIe NVMe AIC SSDs, and M.2 NVMe SSDs, the new interface far surpasses the bandwidth limitations of previous generations. GIGABYTE has keyed in on the performance potential of PCIe 4.0 and has refined the design of its motherboards to elevate the performance of peripheral components. Design features such as server-grade PCBs with low inductance and a PCIe 4.0 B-CLK IC maximize the PCIe bandwidth to increase the data transmission capacity on PCIe storage devices and boost overclocking performance from CPUs and memory. The motherboard unlocks hidden performance potential on peripheral components, allowing for blazing fast transmission speeds on these devices. As the PCIe 4.0 era arrives, GIGABYTE has also introduced its newest PCIe 4.0 interface based PCIe NVMe M.2 SSD and AORUS M.2 PCIe 4.0 riser cards which allow for 4800 MB/s transmission speeds on the PCIe NVMe M.2 SSDs. Users can install four NVMe M.2 SSDs at once with the AORUS M.2 PCIe 4.0 riser card to increase storage capacity and even build a RAID array through the OS for impressive storage performance and solid data integrity, fully taking advantage of the new PCIe 4.0 interface.

M.2 slots on the X570 AORUS Series Motherboards support PCIe 4.0 and SATA modes so users can purchase M.2 SSDs without compatibility concerns. The 64Gb/s bandwidth of PCIe 4.0 enables M.2 NVMe SSDs to perform at their full potential. Thermal throttling can be a detriment to SSD performance by slowing down read/write speeds and GIGABYTE has implemented M.2 Thermal Guards to combat the excess heat from device operation. M.2 SSD devices are protected from the heat and can perform like they are designed to.

Fan favorite and well-received features from previous AORUS lineups make their return to select X570 AORUS motherboards. Sleek I/O shroud design, RGB Fusion LED lighting, Smart Fan, Hi-Fi audio, and many more trademark features have been further refined and added to the mix with AMD’s built-in features. The newest edition of Smart Fan technology is featured on two of the X570 AORUS motherboards and comes with a noise sensor that measures the decibel levels of the fan noise and enables users to adjust the noise levels to their liking for improved noise reduction. Silent and cool fan operation have never been more user-friendly.

AORUS X570 series motherboards come with the newest version of Q-Flash Plus Technology. Users can easily update the BIOS without even installing a processor, memory, graphics cards, or booting up the PC so they can flash the BIOS without the concerns of not being able to boot up the system due to compatibility issues. X570 AORUS series motherboards use an upgraded BIOS interface, providing users with a more intuitive user interface so they can easily tune their settings to upgrade their performance and overclocking.

X570 AORUS motherboards use only the finest components reinforced by GIGABYTE Ultra Durable™ Technology to extend product durability and service life. Through the use of all solid caps, digital power designs, and Smart Fan technology to provide energy-conserving and effective cooling solutions, AORUS motherboards are an excellent choice for users seeking to build a high-end PC system so they can enjoy the best gaming experience motherboards have to offer.